Tales from the Trail: Four Highlights from our Italy: Sicily Guided Walking Trip

Recently, I had the pleasure of joining Country Walkers Guided Walking trip in Sicily, Italy. As a professional guide myself, it was wonderful to experience the world from the “guest” side of things. The trip itself was unforgettable—doubtlessly the vacation of my life. Here are a few of my favorite highlights:

1. Just outside of Syracuse, the UNESCO archaeological site of “Neapolis” was a great place for us to begin our adventure. With a local guide named Eva, we explored the ruins of an ancient Greek settlement, including the massive altar of Hieron—where over 400 bulls were once sacrificed to Zeus (at the same time!)—an immaculately preserved amphitheater, and the unique stone quarries of “Latomias Del Paradiso”—where ancient workers hacked striking angular overhangs and caves into the tufo rock. Here, we experienced an extra bit of the magic you find on a Country Walkers trip: as we were exiting one of the caves, an opera aficionado began belting out “O Sole Mio” inside. His powerful tenor voice reverberated off the ancient stone and added a quintessentially Italian charm to the moment. 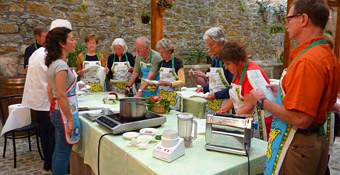 2. Throughout this trip, the food was amazing. I could probably write about any night—from the overwhelming bounty of antipasti on our first night (with accordion accompaniment) to the meal I enjoyed in a pub with a group of crazed, local fútbol fans that I met during a wander in town—but the one that stuck with me the most was probably the one we cooked ourselves. At the Abazzia Santa Anastasia—a vineyard and hotel located in a former Benedictine abbey—we got a hands-on cooking lesson with the amazing Chef Antonio Bonadonna. Starting with just some flour, egg, and water, we learned to make pasta from scratch—including how to cut it and shape it to make a wide range of varieties. After taking a break at the winery for a glass of Rosé and some bruschetta, we sat down to a delicious dinner: our own pasta, made delectable by Chef Bonadonna’s culinary magic, followed by a course of grilled chicken or fish. I opted for the needlefish—which I had never had before—and was rewarded with a meal I’ll never forget. The dish was soupy, with a wide variety of herbs and spices, punctuated with tomato, and sprinkled with crunchy croutons. Fantastic!

3. I was really impressed with the natural beauty of Sicily. From the riotous wildflowers dotting the macchia on the hills to the staggering, weathered features of its volcanic bedrock, the island is full of natural wonders. We really got to enjoy this on a hike along the slopes of Mount Etna. Starting out at around 5,900 feet, we hiked a dark-grey lava track which took us winding down past amazing views up the black cinder slope to the snow-capped peak of the mountain. It was chilly up on the mountain—perfect weather to enjoy a mug of hot chocolate or caffe latte from a guide’s thermos. Eventually, we wound down the the historic Rifugio Citelli, a mountainside refuge where we enjoyed a rugged mountain lunch while staring up at the mountain. 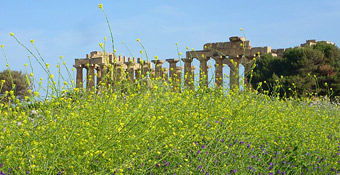 4. For me, the last day of the trip was the cherry on the pie: we visited Selinunte, a large archeological site next to the sea, with incredible temples, walls, ruins and fortresses. One might assume that, after visiting so many ruins in this history-haunted region, I would have been a bit tired of them by this point, but I found this complex deeply moving. The remains of an acropolis in an ancient Greek settlement, Selinunte offers a number of fallen temples to wander, as well as the remarkable resurrected Temple of Hera (which was rebuilt in the early 20th century), and an extensive network of walls which marked the boundary of the hilltop temple complex. In this space, we were each able to explore on our own—I was the only one to pick my way through the tall grass to the sandy sliver of beach beneath the site. There, I walked along the slopes by the sea, eventually scrambling up the slope to find twelve enormous columns standing in profile against the blue sky, the remnants of a past splendor over two millennia old.

If you’re interested in learning more about Country Walkers Guided Walking trip to Sicily, you can find out all about it here.