Want to escape the stressful demands of modern life and get back to nature? Then join a Country Walkers tour of British Columbia. Situated along the Pacific coast of Canada, British Columbia is a feast for the eyes, with miles of untamed wilderness framed by majestic mountain ranges.

So great is the natural beauty of the province that it has driven many a writer to wax poetic about its rugged splendor. Check out the quotes and literary excerpts below, and let them inspire you to make your own journey to British Columbia: 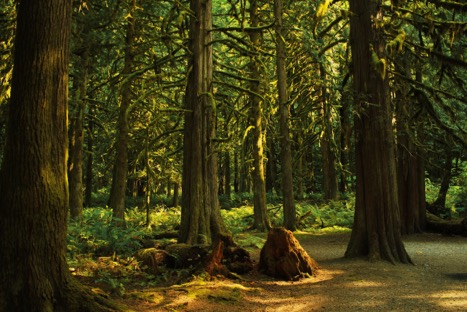 From "British Columbia," a poem by John Hancock:

If I close my eyes and think a bit

I can picture myself there

To fish the mighty Fraser again

What a joy that would be

I wish I was back in that land

From the novel See What Flowers by Shannon Mullen, on Vancouver Island:

"The forest is blanketed by the greenest ferns and moss and bonsai-like trees, a wild majesty that beckons hobbits and pixies and elves and dreamers."

Covered by lush forests just as author Shannon Mullen described, Vancouver Island has been a haven for artists and writers for decades. Visitors to this enchanting island get the best of both worlds: unspoiled nature to be enjoyed by day and the magic of the culinary and music scenes of British Columbia's capital, Victoria, to be savored by night.

From Alexander Caulfield Anderson, as compiled in Nancy Marguerite Anderson's book, The Pathfinder: A.C. Anderson's Journeys in the West:

"The Pheasant shirrs past; the scrannel-pipe of the larger Crane - ever a watchful sentinel - grates harshly on the ear; and the shrill whistle of the Curlew as it soars aloft aides the general concert of the re-opined year."

More than 570 species of birds call British Columbia home, and 19th-century explorer A.C. Anderson certainly saw many of them on his adventures throughout the province. British Columbia is home to many different types of wildlife in addition to colorful birds, including grizzly bears, bald eagles, and caribou.

From the spoken word poem "Walking Through Words" by Shane Koyczan:

Until you're standing at the bottom of it

Face to face with it

Until you take your first step to the top of it

Until you reach the summit and stand eye level with the setting sun ... "

Walking through the ancient mountain passes and rainforests of British Columbia is humbling, as Canadian spoken word artist Shane Koyczan soon found out. Listen to his incredible poem and learn about his journey through the rainforests of Tofino.

Discover British Columbia for yourself on our British Columbia: Vancouver Island tour. To request a free Country Walkers catalog and learn more about other exciting destinations throughout the world, click here. If you would like to speak with one of our Travel Experts, please call 800-234-6900. They are available Monday through Friday from 8:30 a.m. to 6:30 p.m. EST and Saturday from 10:00 a.m. to 3:00 p.m. EST.