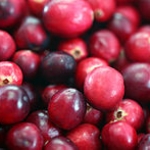 Maine is known for lobster and potatoes, but did you know cranberries (Vaccinium macrocarpon) are an important part of Maine's agricultural identity?

On our Maine: Acadia National Park tour, you spend a day walking on Little Cranberry Island, one of the five Cranberry Isles—Great Cranberry, Little Cranberry or Isleford, Bear, Baker, and Sutton. The islands are from one to five miles offshore and named after the low-bush wild cranberries that grow profusely throughout their terrain.

Cranberries were cultivated in Maine through the 19th century, but the industry died out during the 20th century, due to, among other things, the populous' penchant for that canned jelly stuff. Other factors include a lack of technology for frost protection, the spread of disease and pests, depressed demand during World War I, and the increasing trend toward specialized farming, according to Cranberry Agriculture In Maine: Grower’s Guide, 1996 version. In 1988, there were no commercial cranberry growers in Maine.

In 1991, a Maine farm began cultivating cranberries to sell, and the industry has seen a rebirth. With new technologies and an increased interest in locally produced foods, the cranberry industry is again successful. In 2010, according to the University of Maine, there were 30 commercial cranberry producers.

There's great reason to celebrate the tart little berry—after all, it is one of just three fruits that are native to North America! (The others are Concord grapes and blueberries.) Cranberries kept scurvy at bay by providing vitamin C to Native Americans and the Pilgrims, as well as by keeping them healthy with dietary fiber and the essential mineral, manganese.

Next time you enjoy cranberry sauce on Thanksgiving, you can appreciate the important role this tiny fruit played in American history.

Check out this time line, from the University of Maine, to learn some cranberry history.

What's your favorite way to enjoy cranberries? On cereal? In muffins? Jam? Let us know!