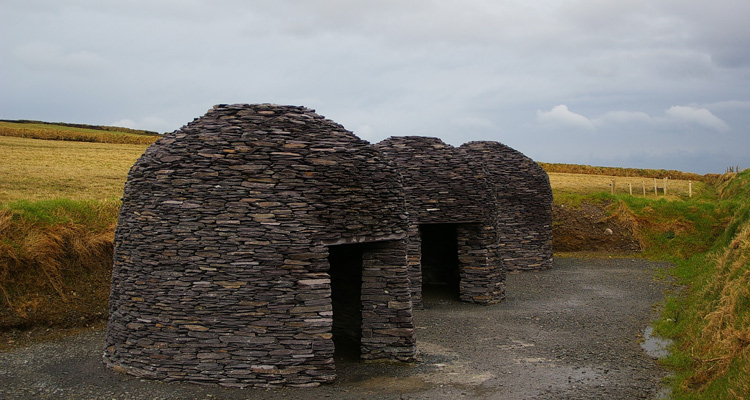 Southwestern Ireland is, in many ways, the region of the country that informs many people's ideas about the Emerald Isle: a closeness with the sea, waves slamming up against rocky cliffs of verdant plains, a colorfully provincial and artistic local community. All of these are common in Counties Cork and Kerry, as well as on the Country Walkers Ireland: Cork & Kerry self-guided walking tour.

There are many remarkable sights here, but few are quite as remarkable as the clocháns, beehive-shaped huts located along the historic Dingle Way. This route is the primary site of these ancient structures, which makes it a highlight of any trip to Cork and Kerry.

These stone huts have been used as lodging for hundreds of years. There are as many as 400 huts intact in this region. The ruins of nearly that many individual structures can also be seen on Dingle Way. They serve as an example of an architectural technique still used today: corbelling, or building structures in such a way that they support themselves without mortar.

There is considerable historical significance regarding these stone dwellings. Caher Conor, a group of five clocháns, is believed to have been a site of spiritual importance many centuries ago, although it is unclear whether the huts are Celtic or Catholic in their heritage.

Other Notable Sights on Dingle Way

Dingle Way is one of about 30 major trails on the Emerald Isle, stretching 179 kilometers (about 111 miles), and according to the Dingle Way's official website, there is no shortage of intriguing sights along its lengths:

To learn more about our walking tours in Ireland, click here. To request a free Country Walkers catalog and learn more about other exciting destinations throughout the world, click here. If you would like to speak with one of our Travel Experts, please call 800.234.6900. They are available Monday-Friday from 8:30 a.m. to 6:30 p.m. EST.