The only thing more inviting than Ireland’s emerald expanses is the boundless warmth of its people.

Ireland’s southwest coast stretches before you as you leave the graceful arc of Ventry Beach and set off on the Dingle Way. Verdant fields slope down to meet black cliffs, lashed by the pounding surf. Far to the south rise MacGillycuddy’s Reeks—Ireland’s highest mountains; due west lie the Blasket Islands, with the unbroken Atlantic beyond. Walking Ireland’s wide-open landscapes on this walking tour in Cork and Kerry has filled you with a sense of boundless freedom. This land breathes history, from the prehistoric beehive huts beside your path to Gougane Barra’s ancient lakeside monastery. Even more timeless is the warmth of the Irish people: your welcoming innkeepers, fellow walkers, and the spirited denizens of Dingle’s pubs, where good music and good cheer last long into the night.

On all Self-Guided Adventures you can count on...
A local representative available 24/7
Detailed maps & route notes featuring turn-by-turn directions and places of interest
Delicious meals—many are included
Scheduled taxi transfers to bring you to and from each day’s walks (excluding self-drive adventures)
Gracious accommodations that are a clean, comfortable home away from home
Experts to handle all the details, including moving your luggage between hotels while you’re out exploring
Access to a Self-Guided Flight Concierge—ask our knowledgeable team to find flights that sync with your planned trip

This tour can be requested starting any day of the week from April 15 through September 30, 2022, subject to availability

From your arrival point, you are met and driven to the small hamlet of Gougane Barra in western Cork, a wonderfully pristine part of Ireland. Your lakeside family-run hotel overlooks St. Finbarr’s Oratory on a small island. Surrounded by heather-clad mountains, the lake is a beautiful and peaceful place, and there is a lovely walk available to stretch your legs.

Awakening to lakeside tranquility and a full Irish breakfast, today, you explore the Gougane Barra Forest Park, which offers a range of trails of varying distances and degrees of difficulty. Each one has a specific theme that best showcases the spectacular panoramas of mountains, valleys, streams, and lakes. Developed as a forest park in the early 1960s and officially opened in 1966, the Gougane Barra valley and lake owe their dramatic geology to glacial origins. The Forest Park of over 350 acres was planted in the late 1930s over what was once farmland. Now, you walk amid impressive stands of lodgepole pine, Sitka spruce, and light green Japanese larch. Finbarr, the founder of Cork, established a monastery here in the 6th century as well as a hermitage on the small island in Gougane Barra Lake (Lough an Ghugain), which can be reached by a short causeway.

Today, stroll along a section of the Sheep’s Head Way, a long-distance trail over 93 miles (150 kilometers) in length, which passes along the coast of the Sheep’s Head Peninsula and throughout the general Bantry area. Walking here, you’ll discover a peaceful, unspoiled peninsula which has some of the most beautiful scenery in all of Ireland—low, rugged hills and cliffs that feel wonderfully remote, despite being no more than a few hundred meters from roads at any point. After a short taxi ride from your hotel, the route starts at a pass along the spine of the peninsula and follows a stretch of this ridgeline, with extensive panoramas of the Atlantic. To the north, the Caha Mountains and the Beara Peninsula are clearly visible across Bantry Bay, and to the south is the more-sheltered Dunmanus Bay, with its pretty villages nestled along the shore. At the end of your walk, you arrive at Bantry House, a stately 18th-century mansion set in formal gardens on the southern shore of Bantry Bay. It was the seat of the Earls of Bantry and has extensive gardens, as well as a pleasant café, on the grounds. Admission here is included on your tour (please note that Bantry House is closed on Mondays from April 14–May 31 and September 1–October 31; please avoid starting your tour on a Saturday during this time frame should you wish to visit Bantry House on Day 3). Your final destination of the day is just a few miles away in the quiet coastal village of Ballylickey.

Today begins with a drive (approximately one hour) over Moll’s Gap, with the famous Ladies’ View over the Killarney Lakes, and to the start of your walk at Derrycunnihy Church on Galway’s Bridge. The route takes you through the Killarney National Park, home to the only natural herd of red deer in Britain or Ireland. You continue through the mountains to the Torc Waterfall and on to Muckross House and Abbey, where Queen Victoria paid a visit to the Herbert family in 1861. Today, many of the rooms in this magnificent mansion have been restored to their original Victorian splendor, and between the months of April and July, the mature rhododendrons of Muckross Gardens are in spectacular bloom. Adjacent to the house are the Muckross Traditional Farms, which portray the farming methods and way of life in a typical rural community of the 1930s. The workshops, shops, and restaurant are all worth exploring. From here a taxi delivers you to your accommodation for the next two nights in Killarney.

At your doorstep you have a plethora of things to do in and around the town of Killarney, from a range of walks, to castle touring, town strolling and shopping, bike riding, or pony trekking. Perhaps one of the best-known natural sites is the Gap of Dunloe, a narrow mountain pass between Macgillycuddy’s Reeks and Purple Mountain. About seven miles in length from north to south, within it are five lakes—Coosaun Lough, Black Lake, Cushnavally Lake, Auger Lake, and Black Lough—all linked by the River Loe. Connecting the first two lakes is the Wishing Bridge, so-called because it is said that wishes made while upon it are destined to come true. Nearby is Ross Castle, standing on the shore of Lough Leane. The original home of the O’Donoghue Ross Chieftains in the 15th century, the castle has been magnificently restored. The site holds evidence of human habitation going back 9,000 years, with one of Europe’s earliest Bronze Age copper mines dating back some 4,500 years. One walking option here is a 90-minute route around the archaeological sites of Ross Island. You can also walk into the vibrant and charming town center of Killarney, with the tall-spired St. Mary’s Cathedral, as well as a Gothic Franciscan church. While in Killarney, enjoy the town’s long tradition of late-evening shopping.

This morning’s destination is the Dingle Peninsula, just over an hour’s drive away. A first short stop is at the fabulous Inch Beach, made famous in David Lean’s 1970 film, “Ryan’s Daughter.” The drive takes you past Dingle (you’ll have plenty of time upon your return to explore the town and surroundings) and on to Ventry Beach, where you begin the day’s walk. The route starts along the beach before rising slightly to skirt the base of Mount Eagle. Here, spectacular views open up over the Blasket Islands and the Atlantic Ocean as you pass beside Neolithic clochán, beehive-shaped drystone huts. The walk ends at the excellent Blasket Islands visitor center, which provides an informative overview of the communities that once lived on the remote islands. You soon return to Dingle, perhaps for a pint of Guinness at one of the town’s 52 pubs, before walking to dinner at a restaurant of your choosing.

The town of Dingle invites exploration—with its colorful houses, lively fishing port (and resident dolphin, Funghi), pubs and restaurants, quaint shops, and livestock market. Nearby are local walks, as well as boating options. A vibrant town of only 2,000 residents, it is a flourishing tourist, fishing, and agricultural center. Boat trips from Dingle include whale-watching excursions and deep-sea fishing. As a market and fishing town, its numerous pubs not only provide delicious food and drink, but some also specialize in selling items from Wellington boots to sheets, blankets, and fertilizer! The town is a center for traditional music, and you can listen to it in the pubs in the evening. By day, perhaps visit the Dingle Record Shop on Green Street, or the Dingle Music School, dedicated to making Irish music as accessible as possible. Pottery is another local craft.

After breakfast, an included taxi ride from Dingle to Tralee is provided (60–90 minutes) to make your train or bus connections. 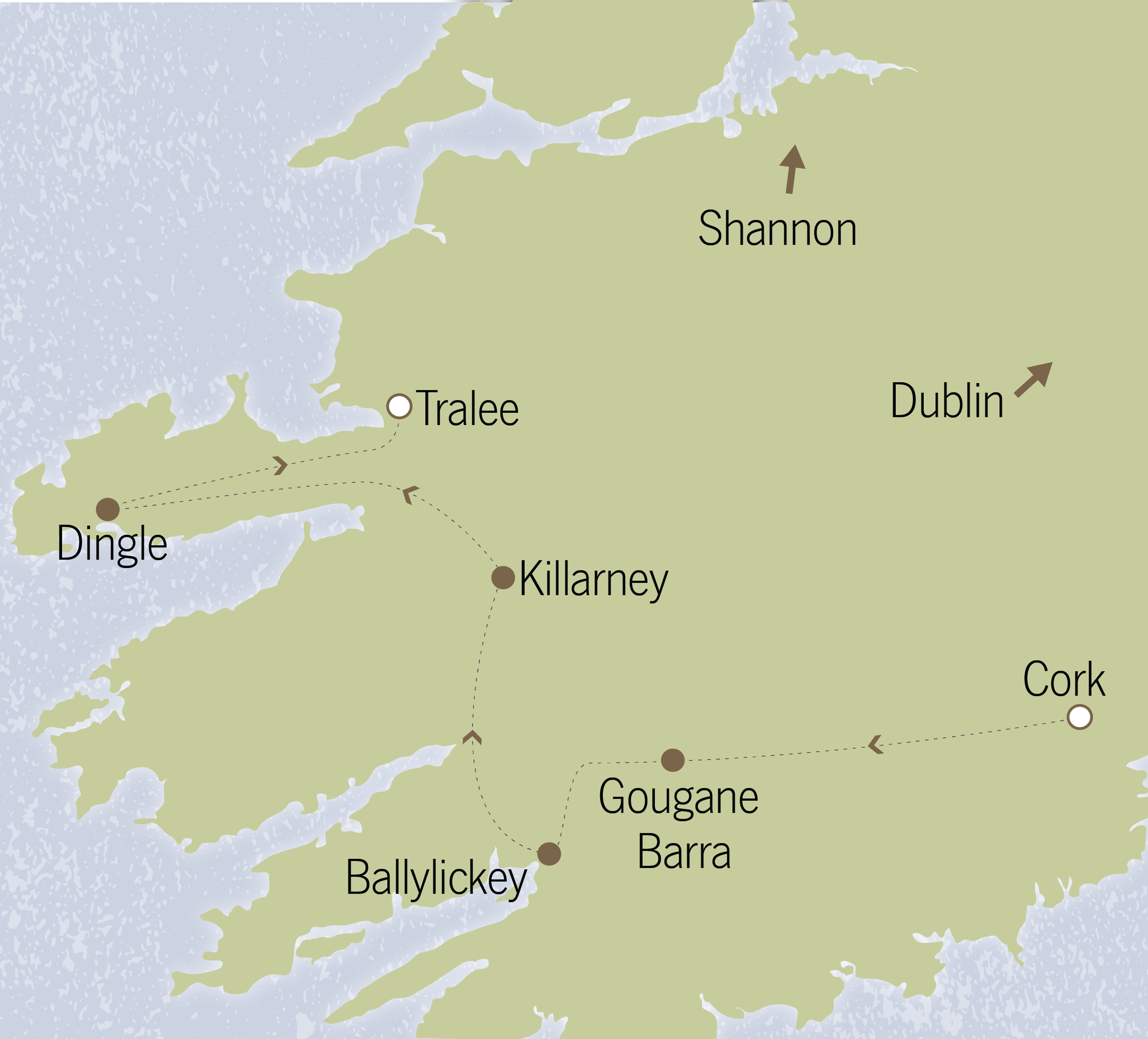 On the shores of tranquil Lake Gougane Barra, this traditional three-star hotel, in the same family for five generations, sits adjacent to a national forest park with a large network of trails. Comfortable modern rooms in warm colors are un-air-conditioned and have either lake or mountain views. Available for guests’ use are boats and bicycles, also several cozy sitting rooms, and a bar. An excellent restaurant serves updated traditional fare. The stone remains of a 7th-century monastery occupy an island in the middle of the lake.

Set in manicured grounds and stunning subtropical gardens overlooking Bantry Bay, this elegant Victorian manor house is renowned for its gracious hospitality and attention to detail. The warm and inviting staff is always happy to chat and the property boasts fresh flowers, attractive antiques, sumptuous fabrics, and furnishings with personality. Well-appointed rooms are naturally cooled without air conditioning. In the award-winning restaurant—set with polished mahogany tables and crisp linen—service is friendly and informal while the menu features superb cuisine based on local produce, complemented by a well-stocked wine cellar.

Previous | Accommodation 2 of 4 | Next

The former estate of the Earls of Pembroke, this hotel was built in 1877 amid tranquil, lush greenery on the doorstep of Killarney National Park and a 15-minute walk from the center of town. The country manor’s deluxe rooms and inviting common areas are decorated in Victorian style. Rooms are un-air-conditioned with fans available on request. The property also boasts an award-winning restaurant as well as bistro-style dining in the old wine cellar. Please note: this accommodation is available on limited departures.

Previous | Accommodation 3 of 4 | Next

In the heart of the town of Dingle, this luxurious, family-run town hotel is a local landmark. Spacious guestrooms blend traditional antique-style furniture with elegant comforts. Rooms are un-air-conditioned with fans available upon request. The bar and common rooms are richly decorated with antique furnishings and boast elegant fireplaces. Bustling Dingle’s many restaurants, shops, harbor, and walking routes are all easily reached on foot. Please note: this accommodation is available on limited departures.

2022
This tour can be requested starting any day of the week from April 15 through September 30, 2022, subject to availability. Please note that Bantry House is closed on Mondays in April, May, September, and October; please avoid starting your tour on a Saturday during this time frame should you wish to visit Bantry House on Day 3. Please also note that the tour price includes one arrival transport from Cork to Gougane Barra on Day 1 of the tour and one departure transport from Dingle to Tralee on Day 8 of the tour. If traveling in a group of two or more with separate arrival and/or departure times, additional charges will apply for multiple transportation arrangements. All prices are per person, based on double occupancy.

Be the First to Get News & Special Offers