When you join us on our France: Normandy & Brittany tour, one of the special highlights is the food and drink you'll enjoy: haute-cuisine perfected by generations.

The region's latitude lends itself to superb cold-hardy foods like apples, while its proximity to the ocean lends access to the freshest seafood including scallops and oysters. Add in the French dedication to classical cooking styles and appreciation of local foods, and you're certain to experience some of the finest meals of your life.

We'd be delighted to introduce (or re-introduce) you to:

Calvados. This savory and sweet apple brandy is the result of multiple generations perfecting the distilling process. On our tour, we take you to Domaine D'Apreval, which produces several varieties of calvados, including those that qualify Pays d'Auge, a restrictive designation administered by France's appellation d’origine contrôlée, or AOC. To be labeled Pays d'Auge, Calvados must be aged for minimum of two years in oak barrels; double distillation in an alembic pot-still; produced within the designated area in Pays d'Auge; a minimum of six weeks fermentation of the cider; and flavor elements are controlled. At Domaine D'Apreval, we take a tour of the orchard, as well as see the cider-making process, and then enjoy a lunch complete with delicious cider made on the premises. 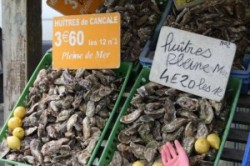 The one-of-a-kind tastes of the oysters of the Brittany coast. Cancale is considered by many the world’s capital of oysters, and with good reason—Louis XIV is said to have requested his oysters from Cancale. Some of the best restaurants in discerning Paris only serve oysters from Cancale. A walk will take you along the edge of Cancale Bay. You’ll be in an oyster haven, with access to the freshest, and arguably finest, oysters in the world. In the mean time, you can practice the French word for oysters: huître. It’s pronounced “hwheat-tra,” like the French word for eight, with a throaty -tra ending. 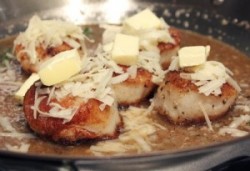 Coquilles Saint-Jacques. You'll savor the freshest of scallops—forget about that weird aftertaste that accompanies the scallops you buy in the grocery store—sautéed in butter, in the way only the French can sauté in butter. The sweet jewels of the sea are accompanied by sautéed mushrooms and seasonings, including curry and cayenne powder, made extra savory with breadcrumbs and Gruyere cheese, and lightened with lemon juice. 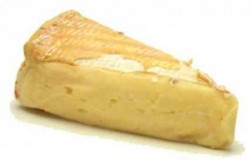 The famous cheeses of Brittany and Normandy, including Pont l’Évêque, Livarot, and the most famous, Camembert (which has been around since the days of William the Conqueror). Pont l’Évêque is thought to be the oldest cheese still in production in Normandy. It is a cow's milk, soft cheese, with that oh-so-French aroma. Livarot is a washed-rind cow's milk cheese, with a barnyard odor. And you probably know Camembert, the soft, palette pleaser that's often thought of alongside brie.

Are your taste buds tingling? If so, be one of the first guests to experience our new-for-2012 France: Normandy & Brittany tour. With all the walking we do, you'll be able to enjoy as much cheese and freshly-haulted seafood as your heart desires.