From 9,000 year-old cave paintings to the forced exodus of Anatolian Christians 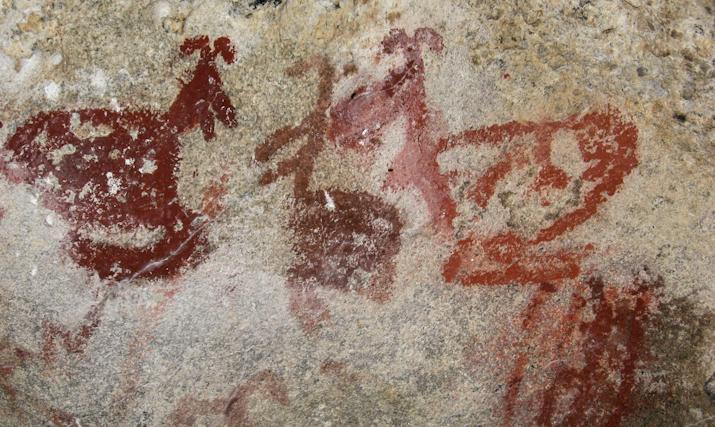 Heather Harding,  a long-time Olympic Peninsula Country Walkers guide sent us this postcard from our walking tour to Turkey.

Today we went to see cave paintings that are 9,000 years old. I think this is the oldest human creation that I have ever seen. I used to think that the rock art I studied in Utah (about 2,500 years old) is old, but know I have a whole new perspective on what is truly ancient.

I was awed when I saw the red paint images (same as the front of this card) of human figures. I imagined the lives of those people living amongst these granite boulders so long ago and how their cultures gradually transformed into the more modern Roman and Lycian societies we have seen as ruins of all week.

The history on this tour has opened my mind to a whole new way of seeing the world. It is poignant that today we experienced the oldest sign of history on our tour, whereas yesterday we saw the most recent ruin of the Tourat Kayakoy. Kayakoy is a ghost town abandoned by the Anatolian Christians in 1924 when Ataturk forced 1.4 million of these people to leave Turkey and go to Greece. The returning 300,000 Turks did not want to inhabit the houses at Kayakoy (afraid of bad luck), so they left them abandoned. We saw them with roofs and walls collapsed, only the shell of buildings remaining. From our guides we learned about the complicated history leading to this population exchange and the establishment of the Turkish Republic, which is the face that Turkey wears today.

Our guides have been so helpful in teaching me Turkish history and connecting the ruins and artifacts we have seen daily to today's societies with cultures, aspirations, and customs.