Four Things You Only Learn About Bhutan by Going There

Recently, I was lucky enough to experience the warm culture, ancient history, and breathtaking views of Bhutan. As a traveler on a Country Walkers Guided Walking Adventure there, I wandered the bustling streets of Thimphu, walked the rice paddies of the Punakha valley, and climbed high mountain passes to ancient Buddhist monasteries. While I expected all those things people tend to associate with Bhutan—soaring Himalayan peaks, beautifully painted temples, and rampant prayer flags—there were many experiences that caught me by surprise. Here are a few that stood out for me:

Flying into the country’s main international airport, I expected to see a massive hub crowded with planes and teeming with people. What I found instead was a simple, rural waystation surrounded by high mountain peaks. We de-planed right onto the tarmac, in the company of a small group of red-robed monks. The one and only billboard was an image of the king and queen welcoming us into their country. To me, the message was clear: don’t expect a megalopolis. Bhutan’s virtue lies in its tiny size.

That spirit carried through to Bhutan’s capital, Thimphu. With a population of only 50,000, it felt more like a rural market town than a national seat (there are only about one million people in the entire country). I was struck by the lack of traffic lights as we drove through the city. Sangay, one of our guides, explained that there had once been one in one of the city’s few busy intersections, but drivers found it too confusing. Now, there’s a small gazebo lavishly painted with mandala designs. In it, a police officer in white gloves directs traffic personally. How humane!

We spent a day walking through fields and farmland—a beautiful open space with views of the mountains in the distance. While there, I was surprised to learn that the land was actually property of the king. There were no fences, guards, or signs to give us the impression that we were on royal land. While many countries cultivate a sense of inaccessibility for their leaders, in Bhutan it seemed like we might run into a member of the royal family at any time. I really liked this. Sangay let us know about his father’s relationship with the previous king. He worked in the palace as a teenager and was advised personally by the king about when he should get married and where. They went on to enjoy a lifelong friendship. In how many other countries can you run across stories like this? 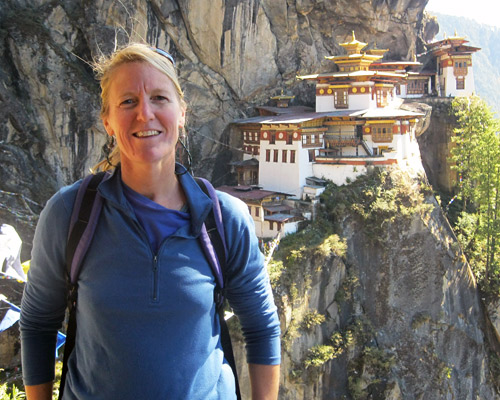 The renowned Takstang Palphug Monastery—better known as “Tiger’s Nest” to Westerners—looks so effortlessly perched on a cliff in the Paro Valley that it’s easy to forget how hard it must have been to build. Walking up the trail to visit it, however, I got a taste for what an incredible undertaking that must have been. Climbing through juniper forest, cliffside staircases, age-old switchbacks, and teahouse “rest stops,” I was amazed to think of workers in the 1600’s making this trip daily, carrying supplies and building materials up the mountainside. As we gained altitude, the path became narrower and steeper, the view out across the valley more expansive--distant rice paddies, riverbeds, and farms.

Of course, it wasn’t just past generations that put incredible effort into making Tiger’s Nest so beautiful. As we ascended into the mountains, we began to notice runs of prayer flags stretching from face to face of the high cliffs, spanning vast chasms and snapping in the updrafts. It was mind boggling to me to picture the people who must have climbed the bluffs to put them in place; the freshness of many flags (and age of others) indicated that such climbs were a regular occurrence.

Finally, we reached a lookout at 9,950 feet where we could enjoy a clear view of the monastery. I was struck by how vivid its white walls were--someone had to carry a whole lot of paint up the mountainside. In fact, I learned, someone had to carry a lot more than that: a major fire in 1998 damaged the complex extensively. That it had been fully restored was a testament to the ongoing devotion of the surrounding community.

Buddhism Can Be Surprisingly Social. 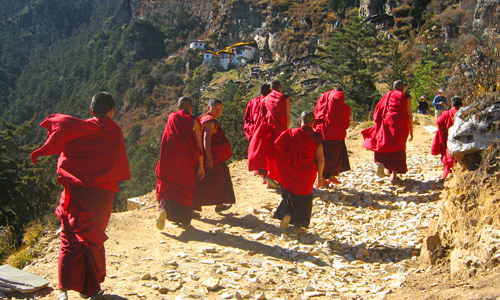 As impressive of the exterior of Tiger’s Nest was, the inside was even more striking. After ascending the final 800 steps to the monastery’s entrance, I was awed by the brilliant colors inside. From age-old paintings gracing walls to vibrant robes on monks in red, blue, yellow, and orange, it was an eyeful.

What struck me most was the range of items left in front of Buddha statues as offerings. Along with the expected, like fresh-cut flowers or candles, I spotted photographs, coins, and even packaged cakes or cookies still in the wrapper. It really drove home how vital and fully integrated into daily life Bhutan’s iteration of Buddhism (formally known as “Vajrayana Buddhism”) can be. It’s not something cloistered off from the rest of life, but rather embraced along with it. You can offer the Buddha a snack the same way you’d offer a friend.

That same mentality carried through when we visited another monastery in the Punakha Valley one afternoon. A member of our group had expressed interest in seeing nuns chant, and our guides were able to make the arrangements. Now, this wasn’t an activity generally open to the public or performed for tourists, so I anticipated an experience defined by reverence, serenity, pageantry, and perhaps a bit of awkward distance. What I found, however, was quite the opposite. When we arrived, the nuns rushed to make us feel at home, offering comfortable mats and pillows for us to sit on. They brought out tea and cookies in their long red robes and were quick to laugh and smile. After their performance (which was breathtaking), they were eager to pose for pictures with us, and seemed almost more excited than we were to see the results. It was so compelling to see a group that saw no disconnect between solemn religious practice and hamming it up with guests.

Indeed, the social, friendly, and light-hearted dimension of Buddhism was something I kept running into. Every home in Bhutan has an altar or shrine in it; some families set aside an entire room for religious purposes and activities. Families gather in these rooms, and monks are often invited here to help celebrate special occasions.

Out on the trail, we’d run into people spinning prayer wheels from time to time. These large metal, wood, or stone cylinders are covered in symbols and mantras; it’s believed that spinning them is the same as voicing prayers out loud. Often, people will sit beside these wheels and spin them for hours, holding a string of beads in one hand to count off each prayer. While this was something I’d read about many times before, one thing I had not anticipated was how much these prayer wheels could become social hubs. Because of their locations—either in the center of villages or beside the trail in the middle of the countryside—travelers would stop beside them and chat with people spinning the wheels. Sometimes, groups of people praying together would talk and laugh together as they spun—the meditation becoming a communal experience as well as a personal one.

The Traditional Ways of Life Are Still Vital Here.

Before traveling to a country, I always wonder how prevalent the traditional cultures will be. Will they be ubiquitous, like the bowler hats Aymara women wear in Peru and Bolivia, or a distant memory, like the lederhosen trotted out for Oktoberfest in Germany? In Bhutan, I’m happy to say that traditional ways of life are still an essential part of the national culture.

Everywhere we went we saw men, boys, and the elderly wearing traditional knee-length robes tied off with a cloth belt. Even our guides dressed this way; it was quite a sight to see their thick socks and hiking boots peeking out. These robes proved quite useful. Because of the way the fabric bunches, a natural pouch forms in the sleeves. Our guides would pull hand sanitizer, hard candies, Kleenex, and more out for us. Once, I noticed a boy on his way home from school produce his books from one of these pouches.

While on walks through rice fields we would see locals harvesting their crop the same way they have been doing for generations. Whole families were out doing their part, from the grandparents to the littlest grandchild, while toddlers sat quietly on small blankets nearby. Rice cultivation is still one of the most common ways to earn a living in many parts of Bhutan, which is why Country Walkers is proud to support a Rice Bank there.

Many homes we saw were built in the traditional style, with livestock such as cows or goats housed on the ground floor of the structure and the family upstairs. To get to the living quarters, you need to climb a steep ladder. Once there, you’ll find a traditional kitchen no different from how they were designed one hundred years ago (many homes don’t have electricity). It was incredible to stand inside one of such homes. And even more incredible to realize that, though our cultures may be different, a warm welcome is universal.