There are few places in the world as exotic as the Galápagos Islands, located 972 miles west of the Ecuador coast. With as many as 26 endemic species of animals—meaning these animals live here and only here—the Galápagos are as close as us non-astronauts can get to feeling like we're on another planet.

Jane Agran, one of our Tour Consultants, recently voyaged to the Galápagos on our sister company's small ship cruising excursions, Ecuador: Galápagos Islands.

Jane was overwhelmed by the incredible wildlife she encountered, on land, sea, and in the air. Colorful fish, odd-looking birds, and playful sea lions kept Jane reaching for her camera. But Jane didn't need a zoom lens to capture the creatures of the Galápagos—she was so close, she could have touched them, if touching was allowed.

"Having never snorkeled before, I was blown away by all the fish—their color, sizes, proximity to me," Jane said. "Swimming alongside the sea lions and sea turtles was extraordinary."

The animals allow you to near them, because they don't know humans as predators. The Galápagos are a national park and a UNESCO World Heritage site: there is a strong worldwide commitment to protect and preserve this unique region. All the wildlife is carefully protected. "They're very restrictive; I was really impressed with how seriously it's taken. That fact that this is such a special area—they don't abuse it. So many species are endemic to that area, they want to make sure nothing happens."

Some of Jane's favorite animals were the sea lions. "You could be walking along, thinking something was a rock, and indeed, it was a sea lion sunbathing. They're right in front of you. They don't flinch, and they don't run away. ... They were so sweet, with these huge eyes, and their faces were beautiful. I loved seeing them swim in the water. They were so graceful. On land, they really look like they're lazy—they don't move much on land, and when they do, it's not a very graceful movement. Then, when you're in the water, all of a sudden, you'll see a sea lion swimming, and do a loop-de-loop, or put their faces right up to yours. They're like puppy dogs."

Jane also had the opportunity to see the blue-footed booby—a sea bird with literally stark blue feet (second photo). She also saw the frigate bird, (also called man-of-war or pirate birds), a relative of the pelican that is famous for puffing out its bright red chest (last photo) and the famous waved albatross in the midst of their yearly ritual. "I got to see the mating dance they do. It's really amazing to see all the different steps that they go through." 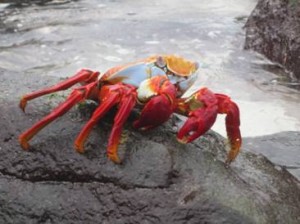 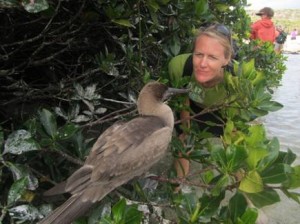 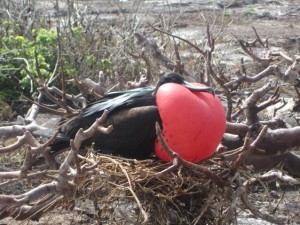 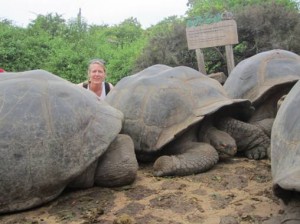 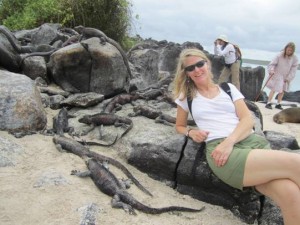 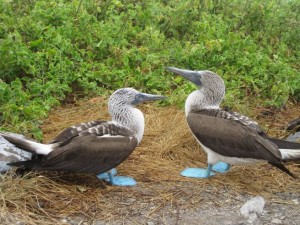 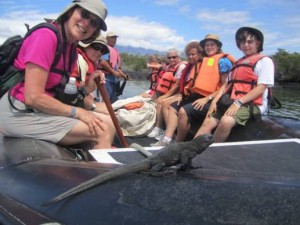 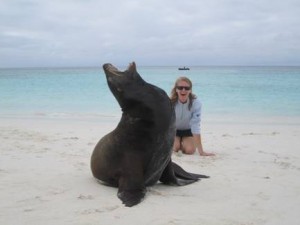