&noscript=1” />
Home
Blog
All the Best of Yellowstone

All the Best of Yellowstone

The American Bison stands six feet tall at the shoulder and weighs over two tons, so it’s an imposing slab of local color to meet on the trail. Walking a quiet path through Yellowstone’s Hayden Valley, say, it can be a shock to encounter one of these gentle giants grazing in the sagebrush or wallowing in a patch of dirt. With dark woolly fur, mud-flecked horns, and an imposing head securely fixed to the mother of all hunchbacks, bison seem like something ripped from another time, space, or ecology. In a way they are: as the largest land mammal in the Western Hemisphere, they’ve become indelible icons of a bygone West, the poster children for an ecosystem that’s rapidly vanishing.

Needless to say, by our third day in Yellowstone, we’d grown tired of them. It wasn’t for any defect or lack of charm on the part of the bison—watching massive herds cross the Central Plateau is always a thrill—it was simply that there were so many other things to experience in this exceptional wilderness. So while our first sighting inspired exclamations, awed silence, and dozens of camera clicks, by our eighth or ninth, we were eager to press on.

I had the pleasure of visiting Yellowstone as part of a Country Walkers Guided Walking Adventure last September. Along with guides Dave Akers and Brenda Holland, I accompanied a group of 14 seasoned travelers on a six day, five night romp through the cradle of conservation, enjoying canyonside hikes, close-up views of spewing geysers, and, yes, plenty of bison along the way.

Having hiked in many National Parks, the first thing I noticed about Yellowstone was how categorically different it was from other wildernesses I’ve known. While hikers in many reserves may hope to spot an animal at some point—a glimpse of a moose across a valley, a muskrat spooked beside a river—in Yellowstone breathtaking wildlife is de rigueur. Our days were punctuated frequently with sightings: a family of elk beside the Madison River, mule deer foraging near Dunraven Pass, bighorn sheep on the slope of Mt. Washburn, an osprey watching the water cascade down Gibbon Falls. In many ways it felt more like a safari than a hiking trip. I found myself constantly scanning the horizon, hypervigilant of every rock and fallen tree, waiting for that one shadow to shake loose from the landscape and reveal itself to be something more.

If Yellowstone was a safari, I knew exactly what its “lion” would be: the grizzly bear. Dating back to the early days of the park—when rangers set up bleachers beside garbage dumps so tourists could watch the animals feed—grizzlies have always been synonymous with this national park. As home to the last wild population in the continental United States, Yellowstone boasts over 600 tawny titans ambling through each year, and a delectable smorgasbord of their favorite foods: whitebark pine nuts, cutworm moths, ungulates, cutthroat trout, and huckleberries. Dave and Brenda maintain that they see a grizzly every week to ten days while guiding in Yellowstone. So, if ever there was the perfect opportunity to see them in the wild, this was it.

By day three, however, I was getting a bit nervous. We’d spent the previous afternoon following the rim of the Grand Canyon of Yellowstone through lodgepole pine forest and Douglas firs, looking off a 2,000 foot precipice into rhyolite escarpments streaked with red and green oxidation. From Artist Point, we stared straight into the 300-foot white water wall of Lower Canyon Falls, standing in a spot immortalized by painter Thomas Moran. After dinner that evening, I heard coyotes barking in the distance. Still, no bears. 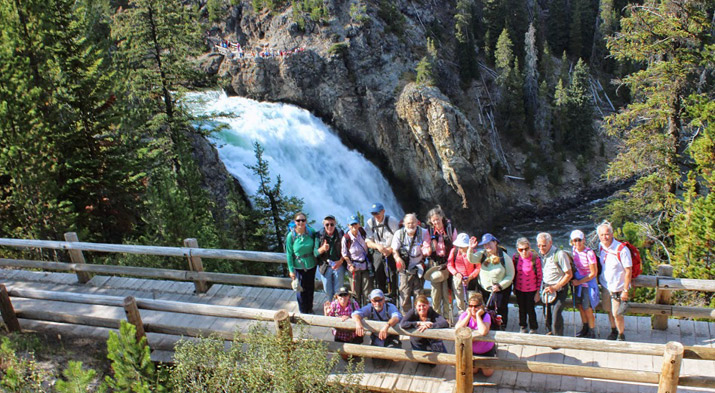 The next day, we strolled out to Imperial Geyser, passing the alien white-gray sinters surrounding Grand Prismatic Spring—a kaleidoscope of deep cobalt water edged with brilliant orange blooms of hot-tubbing microbes. We ate lunch beside the geyser, a quirky fountain in a blue-green pool, perpetually spewing water six feet into the air. As we ate, we watched the wind tug mountain asters in a nearby meadow, and listened to the burble of the geyser.

One thing that’s not hard to spot in Yellowstone is evidence that the park sits upon a massive plume of magma. It seemed like geothermal heat was bubbling to the surface everywhere I looked. Along with the aforementioned Imperial Geyser and Grand Prismatic Hot Spring, we saw ribbons of steam rising from Biscuit Basin across the Central Plateau, mudpots roiling near the Grand Canyon of Yellowstone, and even a lone fumarole venting hot air on an empty ridgeline. In the Upper Geyser Basin, we saw landscapes unlike anywhere else on earth: the iconic blast of Old Faithful, the eerie, geyserite cone of Castle Geyser, the profound colors of Morning Glory Hot Spring. It was uncanny—something you have to see for yourself to fully believe.

But, of course, it wasn’t a grizzly bear.

After lunch, Dave invited us on an optional off-trail hike into the backcountry above Imperial Geyser. This was our big chance. Leaving the parking lots a distant memory, we made our way up Twin Buttes, passing through tall grass and loose stone on our way to a trio of high hillside ponds. “I’ve seen all kinds of things up here,” Dave told us. “Lots of bear and wolves around here.”

It wasn’t a stretch to believe him. In a park as heavily trafficked as Yellowstone—about three million guests per year, but who’s counting—it’s amazing how easy it is to find yourself way off the beaten track when you go with the right guides. Walking a ridge beside the first pond, a sort of primordial stillness took hold. A flock of ducks paddled among the lilypads. The sound of wind through cattails. A hawk flew low overhead and screamed at us. The modern world melted away. It seemed like at any moment we could spot a lone grizzly stalking, imperious, through the tall grass.

What we saw was a bison. It was relaxed in a wallow, a deep brown male serenely blocking our intended path. “Well,” Dave said, “Better than nothing.”

If bear are a bit more difficult to spot in the modern Yellowstone, we had another of the park’s megafauna to thank for that. And as we made our way back down from Twin Buttes, I saw evidence of how this creature had made the park its own. I was walking with a guest named Mary when she pointed at a spot on the ground. “A bone!” she said.

We stopped. The bone was a massive vertebrae—about the size of a softball and bleached white. Soon others appeared. More vertebrae, the broad fan of a scapula, a stout femur. They were scattered around a 100-yard area. Mary, a southern belle with an alarmingly expansive knowledge of animal skeletons, picked up the disembodied grin of a huge jaw bone. “A bison?” we asked each other. “An elk?” And then another question: If a massive mammal died up on this hilltop, what killed it?

“Wolves,” Dave said, when we described the scene to him. “Had to have been.”

That made sense. Since their reintroduction to the park in 1994, wolves have been re-making the park in their own image. Or, perhaps it would be better to say, re-making the park in its own, original image. As the story goes: without wolves to control their numbers, elk populations exploded during the 20th century. These larger herds ate the grasses and willows along riverbanks and floodplains down to nothing, leading to mass erosion, the rerouting of rivers, and the disappearance of beaver from the park. Now, with wolves returned, some areas have found the elk populations back down to historic levels, willows and grasses re-growing, erosion slowing, and beavers returned. Elk have moved up into the relative safety of secluded mountainsides and large scale predators (of which the grizzly is one) have followed. There’s a name for this kind of phenomenon: trophic cascade. And while it’s great for the ecology of the region, it results in a certain irony: the healthier the ecosystem is, the harder it may be to spot some of the animals in it.

On our last full day in Yellowstone, we hiked a boulder-strewn carriage path up to the summit of Mount Washburn. This rocky peak tops out at 10,243 feet and is home to one of Yellowstone’s three fire watch towers—so its views had better be pretty exceptional. It was overcast that day, with blankets of mist rushing over the hills, and we spotted an otherworldly rainbow as we paused at a switchback in the trail. Further along, we saw big horn sheep and Lewis’s woodpecker. Golden-mantled ground squirrel eyed us dubiously from age-old deadfalls. Near the top, the wind kicked up and painted the mountain top with tendrils of fast-moving cloud. It was a buffeting final ascent, with gusts over 60 miles per hour, but we finally arrived at the fire lookout tower and ate lunch inside the glassed-in main room.

Here, nature treated us to a show. As the high winds blew wave after wave of clouds across the distant Hayden Valley and over the knife-edge of the mountain’s ridgeline, we watched storms blow through in a matter of minutes. One moment we’d enjoy views stretching out over 50 miles, the next we’d be completely fogged in, with raindrops pelting the panoramic windows. I put a hand against the glass and was startled to feel a deep, surging vibration—the force of wind pounding against a man-made obstacle. It was subtle but powerful, an untamed fury right outside the window.

There’s something breathtaking about the unpredictability and power of the natural world. Whether it’s storms over Mount Washburn, the unexpected eruption of Grand Geyser, or, yes, a family of grizzlies stalking across a hillside, the pure unexpectedness of the experience—the wildness of the wilderness—is awe inspiring. As we began our descent back down the mountain (taking advantage of a break in the weather), I thought about my expectations for the week. Walking in Yellowstone, I can certainly hope to see grizzlies (or wolves, or elk, or bison), but the park will reveal what it chooses. If I could control the experience, it wouldn’t be wild—and that wouldn’t be a park worth visiting. That’s humbling, yes, but also reassuring. Nature keeps no timetable and follows no agenda. Our job is simply to be there and notice what it presents. And Yellowstone, generous wilderness that it is, revealed more than I ever could have imagined.

As we walked back down the mountain, the sun came out and the skies cleared. We spread out along the trail, wet jackets clipped to backpacks or tied around waists. We enjoyed views of distant valleys, unglimpsed by Europeans a mere 150 years ago. I found myself matching pace with Brenda and a woman named Ellen, who could identify birds by their calls. They pointed out woodpeckers and magpies as we walked. A hawk called somewhere in the distance. As we rounded a switchback, Ellen’s jaw dropped and she pointed, “Look at that!” she said.

Down the talus slope: a small puff of fur with round ears and deep black eyes. It eyed us nervously and clutched a leaf of grass in its mouth—a pika. These rabbit-like creatures are considered endangered and found exclusively above 8,000 feet. I’d never seen one before. Silently, we watched it dart across the rocks to its burrow, disappear for a moment, and re-emerge without the sprig of grass. “Can you believe it?” Ellen said.

I could. So what if we hadn’t seen a grizzly on this trip? What we’d witnessed was pretty exceptional. The grizzly would be there next time, maybe for the next group. And, in the meantime, we got to see a pika. How lucky were we?