From the monolithic hulk of Chief Mountain to the dramatic hairpin turns of Going-to-the-Sun Road, Glacier National Park is a complex destination millions of years in the making. Called the “Crown of the Continent,” this spectacular region was sculpted by a broad range of forces over the millennia. Grinding glaciers, ancient seas, hungry grizzly bears, and the Civilian Conservation Corps have all left their mark. How did it all happen? Here’s our snapshot timeline of the history of Glacier National Park. 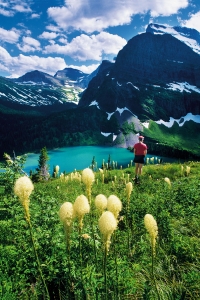 1.6 Billion-800 Million B.C.
Primordial shallow seas deposited sediment on the prehistorical supercontinent of Rodinia, forming layers of sedimentary rock now known as the Belt Supergroup. These ancient rocks are among the oldest on earth—invaluable for geologists hoping to study the origins of life on earth.

170 Million B.C.
Shifting tectonic plates formed the Rocky Mountains. In the process, they pushed a large region of ancient rock eastward into present day Glacier National Park. This patch (known as the Lewis Overthrust) is one of the largest and best preserved regions of Proterozic (1.4 billion-year-old!) rocks in the world. Its most dramatic incarnations include Chief Mountain, which stands alone on the eastern edge of the park, and Triple Divide Peak, which is the meeting point of both the Continental Divide and the Hudson Bay watershed—considered the apex of the North American continent.

100 Million B.C.
The Western Interior Seaway—another ancient inland sea—deposited tons of mud in the region, which eventually hardened into mudstone shale. Hidden in this layer, paleontologists have found many marine fossils. 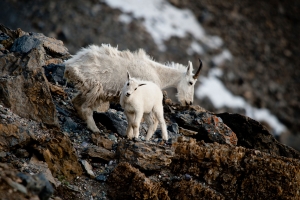 18,000 B.C.
During the last ice age, colossal ice sheets gouged the mountains and valleys of the region, creating massive U-shaped valleys, cirques, and large outflow lakes (which seem to radiate like fingers from the base of mountains). Since 12,000 B.C., these glaciers have been in retreat, though some—like Grinnell, Blackfoot, and Jackson—remain.

10,000 B.C.
The earliest evidence of human inhabitants in the region indicates that tribes arrived shortly after the last ice age. The lineages of these tribes can be traced to current day Shoshone, Cheyenne, and Kootenai.

1806.
The Lewis and Clark Expedition came within 50 miles of both Glacier and Yellowstone, while missing both.

1885.
After a series of explorations by so-called “mountain men” of the old west, George Bird Grinnell first visited the region on a hunting expedition. After several trips, he became a major advocate for the region, spending two decades promoting its establishment as a national park. 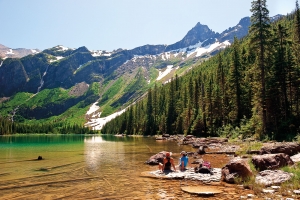 1891.
The Great Northern Railway crossed the Continental Divide along the southern boundary of the present-day park. Hoping to stimulate travel to the region, they worked hard to promote the beauty of Glacier, working with Grinnell and Henry L. Stimson to lobby Congress to make it a park.

1910.
U.S. Congress designated Glacier a national park. The bill was signed into law by President Taft.

1915.
The Great Northern Railway built a number of hotels and chalets throughout the park, modeled on Swiss architecture. Promoters attempted to portray Glacier as “America’s Switzerland.” Railway president Louis W. Hill sponsored numerous artists to come to the park.

1932.
As the automobile became more popular, engineers completed the 53-mile Going-to-the-Sun Road, one of the only driving routes through the park. It crosses the Continental Divide at Logan Pass and was designated a National Historic Civil Engineering Landmark in 1985.

1933-1942.
During the Great Depression, Roosevelt’s New Deal created the Civilian Conservation Corps, a relief agency created to put unemployed men to work. Over the next decade, the CCC embarked on massive reforestation, trail construction, campground creation, and fire-hazard reduction efforts.

2016.
The National Park Service, which administers Glacier, celebrates its 100th anniversary. Country Walkers donated $50 per guest in honor of each person who joined us in the park that year.