Just a 90 minute ferry ride from the Canadian mainland, Vancouver Island presents a time-forgotten world of towering cedar groves, quirky fishing villages, and craggy coastline. Though historically overlooked by world travelers, in recent months the destination has received major accolades from vaunted publications like Conde Nast Traveler and Travel + Leisure. For good reason: this 500km-long island is a wilder Acadia, less-crowded Big Sur, and more accessible Alaska all rolled into one. With stunning scenery, compelling local culture, and eye-popping wildlife, it’s an instant contender for any bucket list. Still not convinced? Here are a few of our favorite highlights.

Some of the World’s Tallest Trees

With climate conditions similar to Washington’s Olympic Peninsula and California’s coastal redwood forests, Vancouver Island is a perfect haven for truly colossal trees. Stands of giant red cedars, Sitka spruce, and Douglas fir tower in the air. In Pacific Rim National Park, a walk on the Ancient Cedars Loop Trail brings you into contact with cedars over 800 years old; one measures almost 40 feet in diameter. Further south, Cathedral Grove in MacMillan Provincial Park presents one of the last remnants of a Douglas Fir ecosystem almost completely wiped out by forest fires 350 years ago. These massive trees are over 250 feet tall. 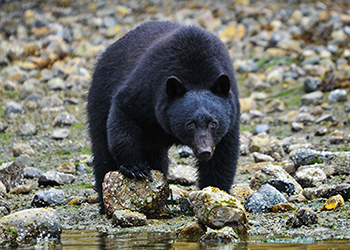 You don’t have to venture far from Vancouver Island’s largest metropolitan area, Victoria, to begin experiencing the region’s spectacular wildlife. Red-tailed hawks, bald eagles, otters, and elk may be spotted throughout the island. But perhaps the greatest thrill is to embark in an open-air, 24-foot rigid-hulled Zodiac-style boat and head into the calm fjord inlets of Clayoquot Sound in search of black bear. Stopping in sheltered bays, you can marvel at these majestic creatures as they forage in tidal pools for crabs, clams, and barnacles.

For more than 10,000 years, First Nations tribes (the ancient peoples who first settled Canada) have called Vancouver Island home. Learn about their fascinating cultures as you explore the island: stopping by beaches where they launched dugout canoes (each made from the trunk of a massive cedar tree), and even talking with a local guide who shares a bit of his people’s history and lore.

The Best Salmon You’ve Ever Eaten 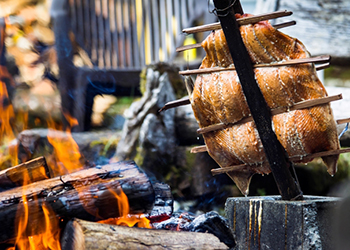 First Nations tribes have revered and depended on Vancouver Island’s salmon for centuries—to the point of considering them spiritually superior to humans. No wonder: the region’s Chinook and Coho varieties are considered the best in the world. Eating them as the locals do—freshly caught, barbecued on the beach, and accompanied by a beautiful sunset—can be for some a borderline religious experience. As our local friend Malcolm Taliano says, “There’s just something about the rhythmic waves, fading light, endless horizon, and feeling of sand beneath your toes. I’ve seen people who didn’t eat fish at all ask for seconds!” 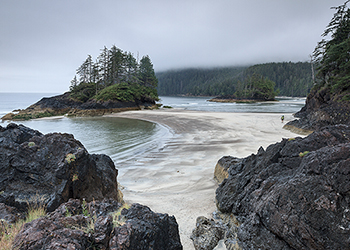 Rocky cliffs lashed by roiling waves, stunning beaches, barrier reefs churning up the surf: for many travelers there’s no topping Vancouver Island’s iconic coast. Nowhere is this more evident than on the island’s remote western shore. Here, you can walk along the Wild Pacific
Trail, keeping an eye out for breaching whales, sea lions, and seals. To take in the drama around you, pause at viewing nooks and decks for a bird’s-eye view of surge channels, tumbling cliffs, and wide sandy beaches.